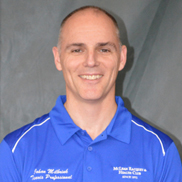 Johan Milbrink grew up in Uppsala, Sweden, and was an outstanding junior player from a young age, consistently ranked in the top 8 in the country for his age group. In his teens, he got to enjoy the experience of travelling and playing many international tournaments in Europe, both as an individual player as well as on the national team. When he was 17 and 18 years of age he also had the opportunity to compete in satellites and challenger level tournaments throughout Europe. He had some early success and achieved an ATP world ranking of 692. Then as an 18yr old he was fortunate enough to get the opportunity to come to America on a full room and board tennis scholarship. There he played Division 1 college tennis at Louisiana State University for 2 years and at University of Miami for another 2 years. He played the number 1 and 2 positions on the team, and as a sophomore he was at one point ranked as high as #5 in the country, while the team was ranked #3 in the country. These days Johan is married with three young children, and he’s looking to pass on the experience he’s amassed over the years to them and other young players to help them develop and mature both on and off the tennis court. To that end, he recently achieved a formal tennis teaching certification by the Professional Tennis Registry (PTR), and he’s developed an advanced junior clinic program focused on progressing young talented players so they can reach their full potential and flourish.