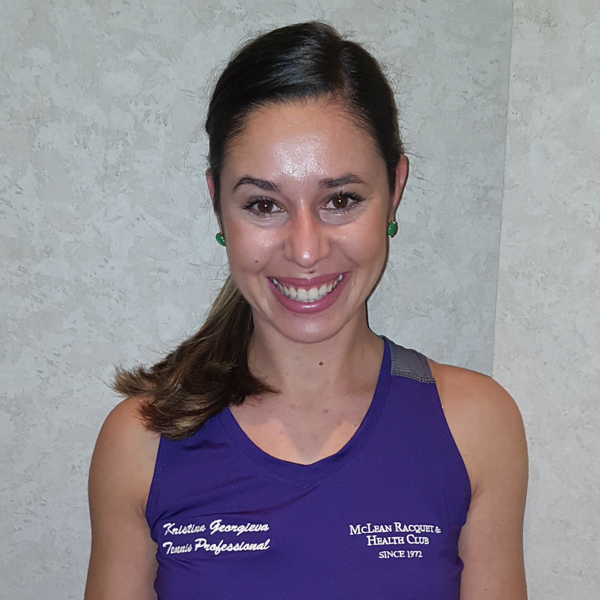 Kristina was born in Haskovo, Bulgaria in 1982, the daughter of Atanas Georgiev and Nadia Georgieva.  She started to play tennis at the age of five with father Atanas, a national coach for the Bulgarian Tennis Federation who currently works for the Federation in an effort to further develop youth tennis in Europe.

Her first major tennis achievement came at age 12 when she won the Bulgarian National Championship in singles and doubles in the 14-and-under age group.  One year later, she played in the European Championship for under-14s, where she lost in the third round in three sets against the later world #1 WTA tour player Kim Clijsters.

In high school, Kristina was consistently ranked among the top eight players in the senior women’s rankings in Bulgaria. She was a finalist in the under-18s junior national tournament in Bulgaria, and finished third overall in the Bulgarian senior women’s doubles tournament. Playing on the pro circuit, Kristina reached a career-high WTA tour ranking of number 870.

After coming to America, Kristina played four years on the American University Varsity Women’s Tennis Team, where she received a full scholarship.  She played No. 1 singles and doubles in her senior year and was named to the All – Patriot League First Singles and Doubles teams for four consecutive years.  Kristina graduated in 2004 from American University with a BA in Public Communications and a Minor in Health Promotion.  Kristina also received her MBA in Marketing in 2008.

Kristina Georgieva joined the team of teaching professionals at the Mclean Racquet and Health Club in 2006.  With regard to her tennis-teaching career, Kristina says: ” Tennis is a lifetime sport and has been my life so far. I plan to stay on the tennis courts for many years to come. I love sharing my knowledge about the game with anyone that loves this sport and wants to learn more about it.”